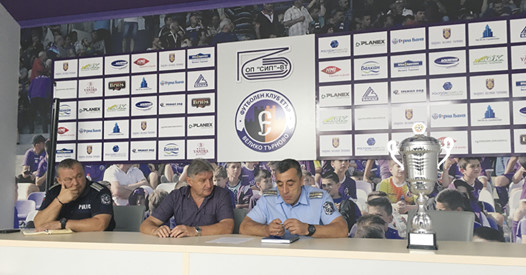 More than 130 police officers will guard the area around Ivaylo Stadium before, during and after Friday’s match with Botev (Plovdiv). This became clear during a working meeting between employees of the Regional Directorate of the Ministry of Interior and the management of Etar. About 50 security guards from Delta Guard will take care of the order and security inside the stadium.

During the meeting, the security plan for the match was discussed, which is from 18:00. Slavyanska and Filip Totyu streets in the area of ​​the stadium are expected to be closed. The goal is to separate the expected 400 fans of the visiting team from the Veliko Tarnovo football fans. During the whole day on Friday it will be forbidden to park cars in the area of ​​the central entrance of Ivaylo Stadium on the north side, in front of the weightlifting and wrestling halls.

The security guards will not allow people who have used alcohol or narcotics to enter the stadium, the import and use of pyrotechnic devices is prohibited.

By Delta Guard in News, Uncategorized

By Delta Guard in News, Uncategorized